All orders ship free and leave our warehouses within 24 hours

Sound can be wonderful—think of Beethoven or birdsong. But sound we don’t want to hear, in the wrong place, at the wrong time, is simply noise: a nuisance that can make life stressful and work, study, or sleep impossible. If you’re plagued by a noise problem, the simplest approach is to kill the sound at its source, but sometimes that’s just not an option. If you live near a construction site, a noisy bar or nightclub, or you have an elderly, forgetful neighbor who plays the TV through your wall at full blast, getting the volume turned down may be very hard work. Maybe you have the reverse problem: perhaps you have a noisy occupation or hobby—you might be a practicing musician or a DJ—and you want to spare the people around you from suffering the sounds you make. What can you do? Fortunately, there’s a simple solution to most of these noise problems: Mass Loaded Vinyl.

Ready to dive in? Let’s do this!

What is Mass Loaded Vinyl?

MLV was created in the 1960s and has seen been used since to add mass to walls, ceilings, ducts, and pipes to block sound.

What is Mass Loaded Vinyl Made From?

Mass Loaded Vinyl is a viscoelastic material. It’s a combination of polyvinylchloride (PVC, or vinyl) and calcium carbonate or barium sulfate. Both calcium carbonate and barium sulfate are high-dense, inert materials (sturdy material that doesn’t cause or promote change) that give MLV its durability and stability. The vinyl makes the MLV flexible and amendable.

Combined, these elements create the golden standard of soundproofing because, in addition to effectively blocking sound, the vinyl can be cut, fit, and bent into various shapes and surfaces thereby ensuring maximum soundproofing efficiency.

What can I use Mass Loaded Vinyl for?

Mass loaded vinyl is a cost-effective noise solution and is one of the more versatile products on the market as far as application. It is primarily used to keep sound from penetrating through walls, ceilings and floors.

Here are some additional ways you can use MLV as a soundproofing barrier:

Not only will MLV act as an acoustic blanket for all of these purposes, but you can also customize it to fit your specific needs thanks to its flexible nature.

What is Sound Transmission Class, and How is Mass Loaded Vinyl Rated on the STC Scale?

Sound Transmission Class, also known as STC, is a numeric value that rates how effective a material will block sound from getting through the other side. The higher the STC rating, the better the material is at soundproofing.

Here is a basic breakdown of the STC ratings and what they mean:

The standalone STC rating for MLV (meaning before it’s installed between walls, floors, etc.) varies depending on the thickness of the MLV being used. Here at Burning River Buys our standard 1/8 inch thick MLV (also known as 1 lb. vinyl) boasts a standalone rating of 26. Add it to typical ½” drywall with an STC rating of 33, and you’ll enjoy significant sound reduction.

Like magic, you and your neighbors are suddenly friends again!

Yes, MLV is safe. It was created to be a non-toxic alternative to lead sheeting which was formally the industry standard for soundproofing. As you probably know, lead material is dangerous — especially for children — and can lead to brain damage, hyperactivity, hearing problems and a slew of other issues.

In contrast to the toxic materials in lead, MLV is made from vinyl and calcium carbonate or barium sulfate (sand and salts). This combination produces a superior soundproofing option without the potentially dangerous side effects of lead sheeting.

How does Mass Loaded Vinyl Work?

To understand how MLV works, we have to first understand how sound travels. Sound is produced when something vibrates. The vibrating body causes the medium (water, air, etc.) around it to vibrate. Vibrations in the air are called traveling longitudinal waves, which we can hear. Sound waves travel through air in much the same way as water waves travel through water. In fact, since water waves are easy to see and understand, they are often used as an analogy to illustrate how sound waves behave. Sound can travel through air, water, solids or any other area where the wave particles can bounce off one another.

MLV will reduce the incoming sound by blocking any direct air pathways that allow sound to travel. This is possible because of it its thick barrier mass. MLV works whether it’s blocking sound from the outside coming to the inside, or the reverse – sound from your space to traveling to the outside. How you install MLV depends on whether the MLV is being applied to an existing wall or to new construction.

In the case of installing to an existing wall, while it is possible to install the MLV directly on existing drywall and add another sheet of drywall directly over the MLV, this would not be the most effective way to reduce the sound that passes through the wall. MLV is most effective when it has a slight space between it and the wall (known as decoupling) so that when sound hits it, the energy of the sound wave is transferred to the MLV, causing it to slightly vibrate, and thus reduce the strength of the sound wave that passes through it. When sandwiched directly between two pieces of drywall, the MLV is not able to slightly vibrate and move freely and absorb the energy.  To create that slight space (i.e., to decouple) a gap can be created by installing furring strips directly to the wall at the location of the underlying studs behind the drywall, and then attaching Soundsulate™ MLV to the furring strips and another layer of drywall over it.

In a situation where the wall studs are exposed (such as new construction), the Soundsulate™ MLV would be attached to the studs, and the drywall attached over the top of the MLV. This situation allows for the side of the MLV that attaches to the studs to slightly vibrate freely and absorb the sound waves.

How do I install Mass Loaded Vinyl?

Depending on how you’re using MLV, the steps to install it may change. But here are the basic instructions for installing MLV in a wall or ceiling:

Measure the wall distance between the floor and the ceiling.  Subtract one-quarter inch to create a small gap around the perimeter.

Unroll the vinyl sound barrier on a flat surface.  Using a T-square or straight edge, cut the vinyl with a utility knife to the measured length.  It’s not necessary to cut the MLV all the way through.  It can be scored then pulled apart.

Protip: Keep an eye out for your electrical boxes and outlets! Expose the electrical boxes by first gently pressing MLV against the box.  Use a utility knife to carefully cut an opening around the edges of the box.  Keep the hole as closely and tightly as possible to the box to maintain a strong seal. For greater sound isolation, use putty pads over electrical boxes before installing MLV.

Starting in the upper corner of a wall, with two people holding it in place, position the material squarely across the top edge so it drapes the wall evenly.

Begin by stapling, nailing or screwing the barrier along the top of the frame using a fastener at every 8 to 12-inch span. If you are using nails or screws, be sure to use large washers to disperse the weight to avoid tearing. Continue down the length of the studs with the same process.

To create a seam on a stud, join two pieces of MLV against one another. Do not overlap them – these should be precisely aligned.  Fasten each length of MLV to the stud. For seams which fall between studs, overlap one length of MLV approximately 2 inches over the next length of MLV. Cut away the overlap at both the top and bottom of the frame. This is important to install drywall flush against the frame.  Seal the seams with 2-inch vinyl or foil tape. Remember, sound, like an unpleasant odor, can leak through gaps and seams. The better the seal, the better the sound reduction.

Repeat steps 1 and 2 until the entire wall or ceiling is covered with MLV.

Hang drywall over the MLV.  Caulk the perimeter seams with an acoustic sealant, such as OSI SC-175 Thermal & Acoustic Sealant.  Finish installing the walls or ceiling with drywall mud/caulk and pvc tape.

Can I paint Mass Loaded Vinyl?

MLV was designed to be installed underneath drywall. However, this may not be possible given your situation and you may have to install it on top of your wall or door. While it works like magic when it comes to soundproofing, it’s not always the most aesthetically pleasing sight to be seen. And not to mention, it marks up easily.

Fortunately, MLV can be painted using latex paint to match any color palette. Just make sure you first use a latex primer.

In conclusion, if you’re looking for a simple, powerful soundproofing alternative to block and absorb sound for your walls, ceiling, ducts, or pipes use MLV. It’s safe, highly effective and easy to install. Talk about a win-win-win!

To learn more about the Mass Loaded Vinyl we carry, click here. 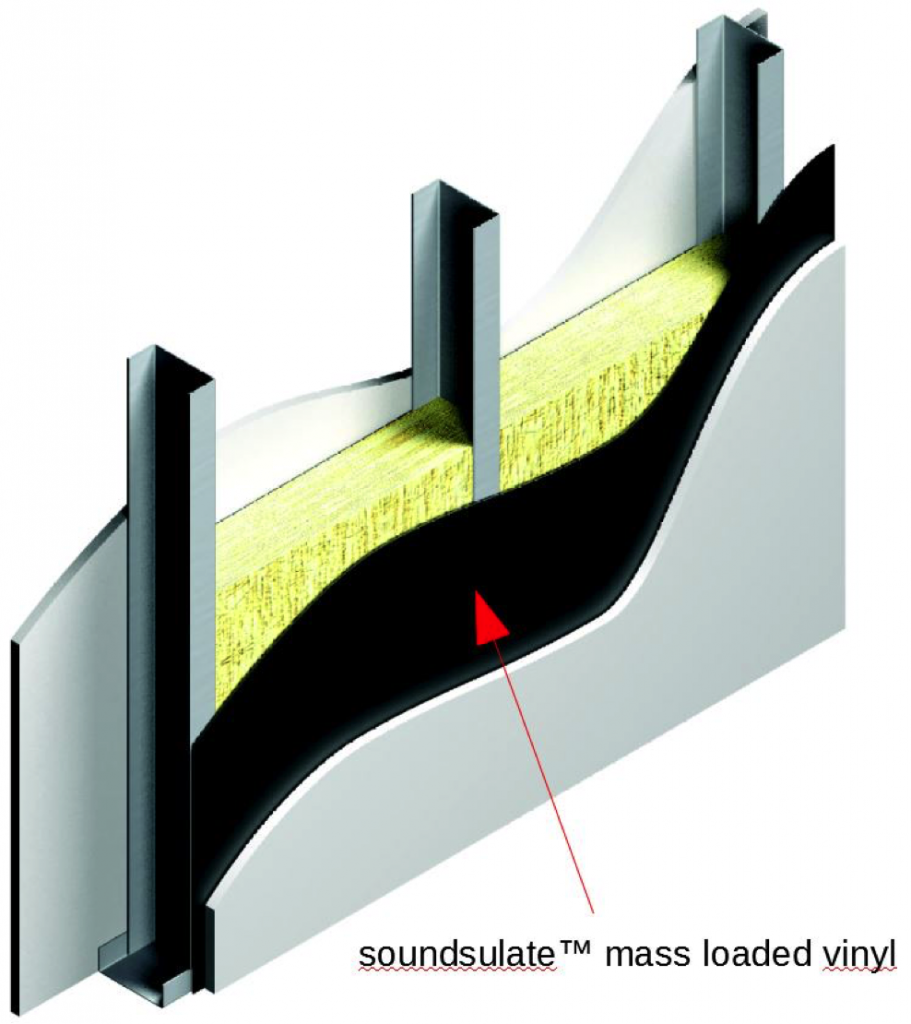 All orders ship free of charge.  Orders under 150 lbs usually ship via Fed Ex ground service the same day if placed before 1:00pm.  These orders can take 2-6 business days to arrive and will arrive without a signature requirement.  Orders over 150 lbs will ship within 24 hours during non-holiday business hours from our closest warehouse location using one of our discounted freight carriers.  Residential freight delivery will require an appointment and will arrive with a liftgate.  The carrier will contact you before delivery to set the appointment.   There are no guarantees on shipping timelines, only those set forth by the carrier.  Once an order is placed, you will receive an order confirmation.  Once the order is shipped you will receive tracking details.  Please contact us for any reason and we will be happy to answer any questions.

If you are not satisfied for any reason, products may be returned within 30 days of shipment for a refund, provided the product is in 100% condition for resale.  Return shipping will be paid by the buyer unless we miss shipped or the item is shorted, defective, or damaged.  For larger orders, we can help coordinate return shipping logistics.  A 10% restocking fee will apply for orders of $500 or more.  For items arriving via freight, please inspect the freight prior to signing.  Note any damage on the BOL and call us to report the damage.  You also have the right to refuse the delivery.